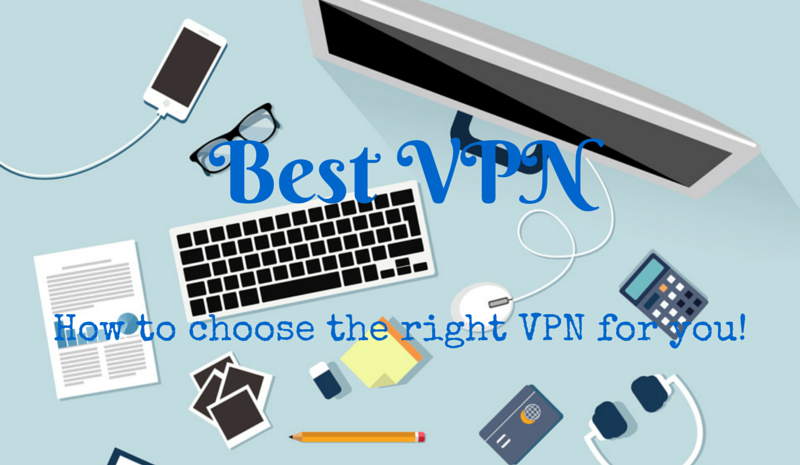 Best VPN – How to choose the Best VPN for yourself?

‘How to choose the Best VPN?’ – This is one question that comes to mind of every user when deciding to use a VPN. It might sound easy but users usually are baffled while deciding between hundreds of VPN services available in the market today. The reason is that in last couple of years, the market has been flooded with massive number of VPN service providers coming in; it becomes all the more difficult to choose the right VPN service when all of them claim to be the Best VPN in the world.

We have highlighted and explained the points that users should focus onto during their decision making process.

These are the key points that a user should focus on while selecting the Best VPN service provider:

1. Check the location of the company and its VPN servers

4. A bundled malware protection is a good to have feature but not crucial for a VPN

8. Make sure the VPN service is compatible with your device and OS

9. VPN should have no data or traffic limit

If you would like to read the details, please read further.

Here’s our detailed guide to make it easy to choose the Best VPN for users.

One of the first things you should see is the VPN server location of the VPN provider. The VPN provider should give you enough options to choose VPN servers from different locations. For example, if there’s a website, a TV service or a media content that’s geo-fenced and available only in the US and you want to access it outside the US, in that case the VPN provider should have a VPN server located in the US and enable you to connect to it. This will change your IP address to a US IP address, making you appear as if you are accessing that particular TV series or website from the US and thus allowing you the access.

You might also want to check the physical location of the company providing the VPN services if you are more concerned about privacy and government surveillance. The location of the company would tell you how your data is handled by the company since the company based in a particular country would subject to the laws in that country. For example, a company based in the US is subject to US laws in terms of managing the data, that they might be forced to release the data to the authorities based on the request.

According to some privacy advocates, it is wise to avoid providers based in countries with mandatory data retention laws. Some others advise to be cautious of countries that are a part of the Five Eyes Intelligence Alliance which includes Australia, New Zealand, UK, US and Canada.

Thus, location of the company and location of VPN servers is extremely important aspect to look at while choosing for the Best VPN for your use.

If the sole purpose for you to use a VPN is privacy, then it is highly important that you check the privacy and logging policy of the VPN provider. When you connect to a VPN, you entrust the VPN service provider with your data and personal information, therefore you need to be well aware of what the VPN provide does to your data internally.

Even though the use of VPN would keep your data and communication safe and secure from external prying eyes, eavesdroppers, snoopers and hackers but your VPN service provider would still be able to access it and save the information. Different VPN service providers have different privacy and logging policy – some VPN providers record data on a temporary basis which is automatically deleted periodically, some don’t record at all while others might record everything.

While doing your research to choose the Best VPN for you, you must have come across VPN security protocol terms like L2TP/IPSec, PPTP, OpenVPN, SSL, etc. The VPN security or encryption protocols are designed to create a secure VPN connection for the user. These protocols typically define the measure of the level of security that you are offered by the VPN provider while you are connected to the Internet. A user should typically look for a VPN with L2TP/IPSec, PPTP or OpenVPN protocols. These are most popular and reliable security protocols which are considered the best in a VPN. Therefore, when you are looking for a Best VPN to use, you need to make sure that it uses one of the above VPN protocols.

Using VPN doesn’t mean you are not vulnerable at all. While using VPN is secure that it protects your data from snoopers but it doesn’t protect you from any virus or malware. Some VPN services come bundled with malware protection which prevent you from downloading a file which might contain a virus or malicious code. While this is not a very important feature for a VPN to have, but its a good to have feature. If the VPN doesn’t have a bundled malware protection, a user can install it separately to increase the protection level. It is also important that whenever possible a user should try and use HTTPS instead of HTTP.

Like we mentioned earlier, it is very important for a user to select a trustworthy and reliable VPN service because a user entrusts the VPN with data, privacy and security. If the VPN provider is not trustworthy then your data and privacy might be in danger which nullifies a users intention to use VPN to enhance security and privacy.

A user could look at the below points while evaluating if a VPN provider is trustworthy.

b.) Number of users who use their services. Usually before downloading an app, one can see the number of downloads. Some VPN providers with higher number of user downloads even put up these details on their website.

c.) Don’t always rely higher Google rankings or review websites. One should always do self research before signing up for VPN service or any service for that matter. Most of the times we tend to go by higher Google search ranks forgetting that they can be optimized by doing SEO. Also, 99.9% of the review websites that review VPN services are biased and their ranks are based on the percentage of commission they get from the provider. While the reviews might be an indicator a user’s self evaluation of the service is always a better idea.

This is one of the basics while selecting a VPN service. Before downloading or signing up with a VPN provider, a user should double check the VPNs compatibility with the Operating System and device that the user wants the VPN to be on.

Most of the top VPN services have compatible across many operating systems and devices.

9. No Data or Traffic limit:

Its not a great idea to go for a VPN service that will have a limit on your data transfer or the number of times you connect to the service in time period. A user should look at this aspect carefully since some VPNs tend to slow down the Internet speed a bit. The best VPN service will have no data limit and no traffic limit, and not have a visible reduction in the Internet speed.

The above are the key points that a user needs to look into while selecting a VPN service that is right for the user. We hope these points help you in finding the best VPN for you.

Just in case you want to have a look at VPN One Click.