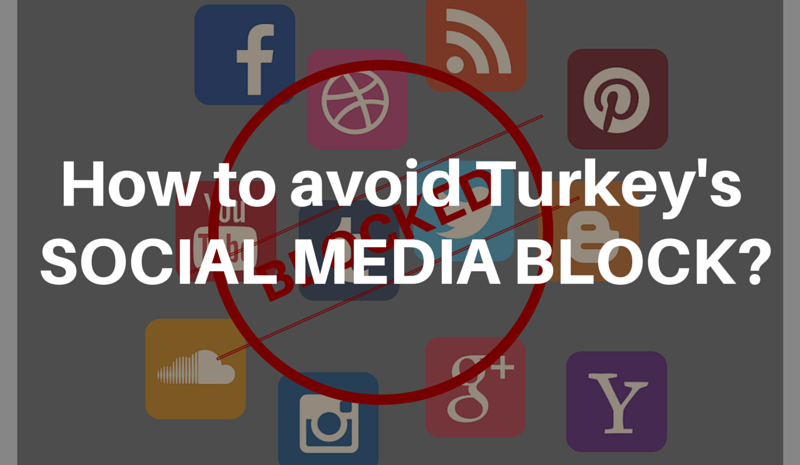 On July 15th, 2016 the reports of an attempted military coup in Turkey started coming in. As the news spread the internet users in Turkey started experiencing trouble in accessing some popular social media websites like Facebook, Twitter and YouTube.

Although it is not fully clear whether Turkey had completely blocked the access to these social media websites or just slowed down their bandwidth. On Friday evening an organization named Turkey Blocks that monitors internet censorship in Turkey tweeted that Facebook, Twitter and YouTube have been blocked in Turkey. 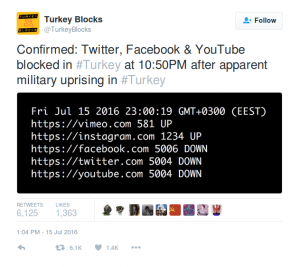 In a subsequent tweet Turkey Blocks tweeted, “Our data indicated a 2 hour period of social media throttling but no evidence of a full internet blackout in #Turkey.”

Some Turkish citizens were still seen as using Twitter and Live Videos feature of Facebook, but it is most likely that they had been using VPNs or Virtual Private Network to access Facebook and Twitter by routing their connections to VPN servers location in different countries and thereby avoiding Turkish government’s blocking measures.

It is not the first time that Turkey has used internet censorship and geo-blocking measures to block certain websites from being accessed by the people in Turkey. Turkey usually blocks access to social media websites like Facebook, Twitter, YouTube, Instagram. On July 2nd, there was an online blackout in Turkey after Istanbul airport attack. Turkey takes measures like Internet blockade in the aftermath of tragedies and violences in Turkey.

Turkey passed a law in 2007 which allows the government to ban or block websites in Turkey. There have been situations in 2014 and 2015 when popular social media websites like Facebook, Twitter and YouTube had been banned and blocked in Turkey.

A huge number of Turkish people resort to VPN solutions to access blocked websites, but it’s not always easy for non-tech savvy people to easily configure VPN software on their devices. We have come up with easy to install and easy to use VPN solution called VPN One Click. VPN One Click has been developed with aim to make it easy for everyone to use a VPN, even for non-tech savvy people. VPN One Click was launched in the year 2011 and is being used by over 1 Million users globally.

On your iPhone and iPad:

On your Android based smartphones:

For any doubts or details, please visit our Getting Started page: www.vpnoneclick.com/getting-started/

VPN One Click has been designed to provide maximum speed for your internet connection with no traffic limit.